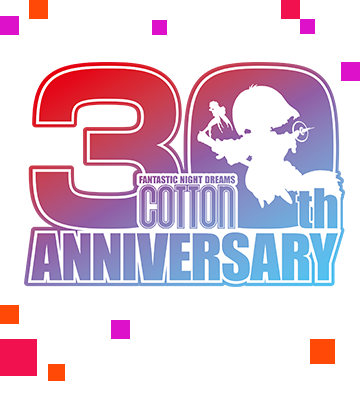 Cotton fans watch out! The young witch Nata de Cotton and her companion Silk are ready for more adventures on your home screens!
In celebration of 30 years of Cotton, we are excited to announce the return of Cotton later this year with two very special comebacks!

Cotton 100%
Cotton 100% gives new Cotton players a great jump start into the franchise. The game was originally released in 1994 on the Super Famicom and later in 2003 on the PlayStation 1. Coming in with a bright, colorful palette it’s ideal for beginners, since it’s easier than the original Cotton.

Panorama Cotton
Panorama Cotton, originally published in 1994, introduces a fresh, new gameplay design into the Cotton franchise. The “pseudo 3D” shoot ‘em up was considered a technical prodigy when it was released on the Mega Drive.
After the queen emerges from the castle in a hurry to save the world from falling into chaos, Cotton and Silk are setting off on their new adventure.

Both games will be available as digital downloads.

But that’s far from all…stay tuned for a very special announcement, coming later this year in celebration of Cotton’s 30st birthday!