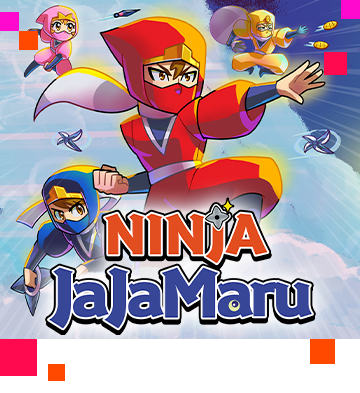 The adventures of Ninja JaJaMaru coming to the West!

Back in the 80s, Jaleco first released one of their most-known franchises Ninja JaJaMaru-kun, spanning several sequels over the coming decades, some of them never released in the West before! We are now bringing three amazing Ninja JaJaMaru collections from the great developers at City Connection to Europe and NA! Restored with love, additional features and English language support, different editions including various titles of the series are heading to your home screens for Nintendo Switch and PlayStation 4! 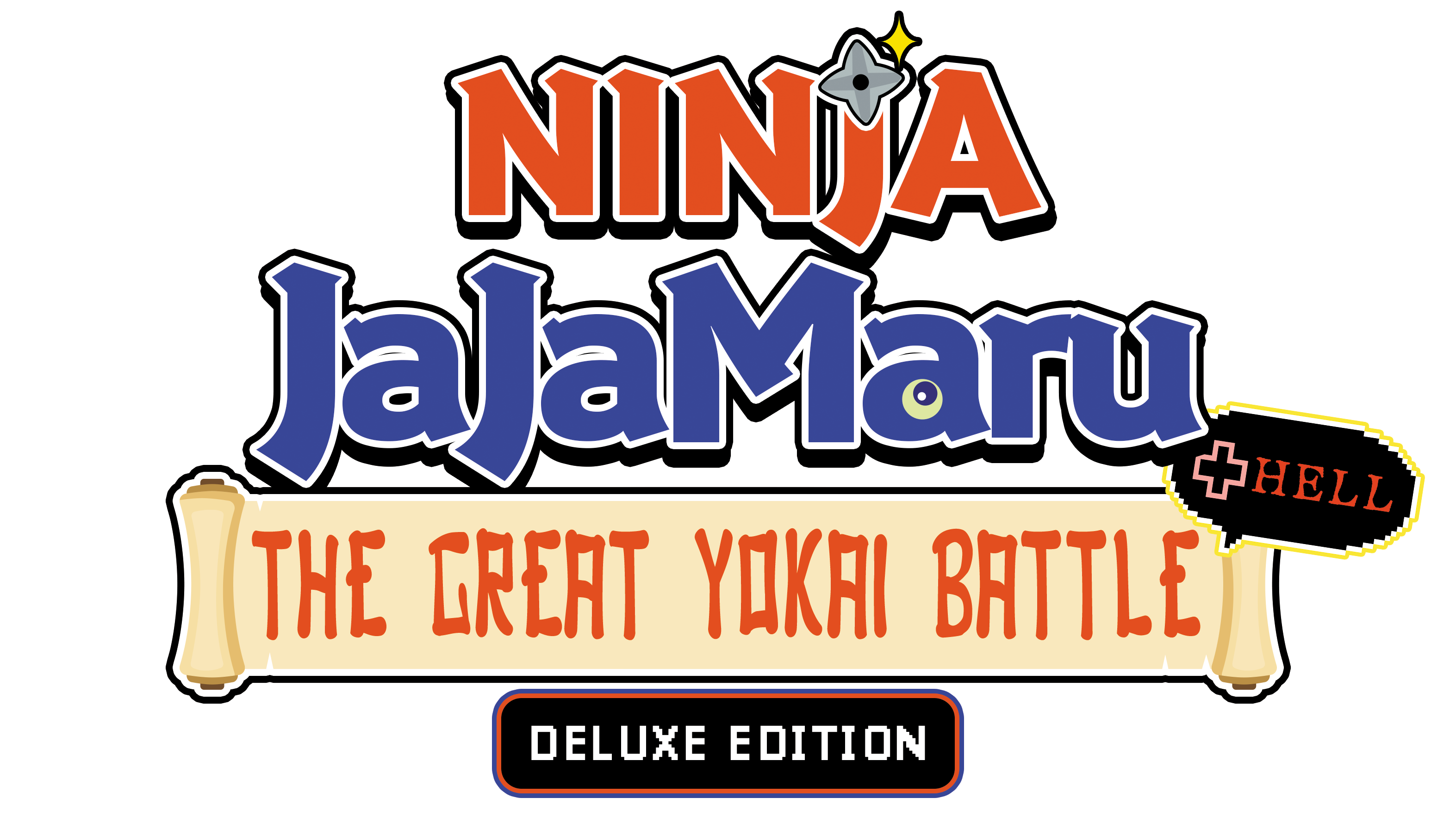 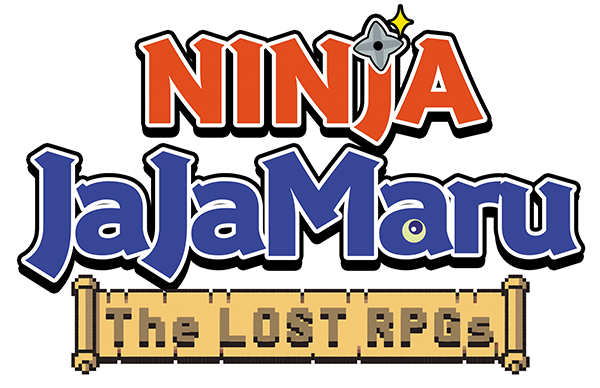 In this special collection, you will get the chance to experience the RPGs of the iconic ninja series for the first time localized into English and outside of Japan!
Relive JaJaMaru’s and princess Sakura’s adventures in two very special games RPGs:

This incredible compilation of the legendary Ninja JaJaMaru will let you travel through time. Starting with one of the best-selling games in 1985, the first JaJaMaru Adventure, where the love story between the Ninja of light and Princess Sakura began, to the brand-new, 2022 released Great Yokai Battle +Hell.

All dedicated collectors might want to check out the store of our friends at Strictly Limited Games. Here you can find special boxed editions including some exclusive physical collectibles. Better be quick – they are only available in a limited amount. More information can be found at strictlylimitedgames.com

The history of the JaJaMaru universe

Ninja JaJaMaru-kun (1985)
Princess Sakura has been kidnapped! Her rescue requires a talented ninja. Help JaJaMaru rescue the princess from the evil Pirate Namazu Dayuu by defeating all enemies in your way and collecting spirits to beat level by level in this classic side-scrolling Jump & Run. But be careful! Your opponent won’t go easy on you. Destroy bricks while dodging dangerous bombs Namazu is dropping. Collect power-ups for invincibility and pick up leaves to get to the bonus level!

JaJaMaru no Daibouken (1986)
Princess Sakura has been kidnapped…again! JaJaMaru sets out once more to save her and face the evil Namazu Dayuu. Fight your way through traditional side-scrolling Jump & Run levels packed with evil yokais and collect mighty weapons and power-ups to get stronger.

Ninja JaJaMaru: Ninpouchou (1989)
Our brave ninja JaJaMaru was asked to investigate some serious incidents. Monsters appeared all over the country, the people of Edo town were turned into yokais, the Book of Shinobi, which carries the knowledge of Ninjas, was stolen and the dragon Ryujin has taken villagers and stopped the rain. Of course, JaJaMaru fulfills his duty as a ninja! Together with Princess Sakura he sets out to banish the evil from the land.
In this first RPG in the JaJaMaru series you accompany the brave duo on their journey through four chapters. Travel through towns and dungeons and fight the dragons and demons which are terrorizing the villagers. Use your powerful ninja techniques to defeat the evil once and for all!

Ninja JaJaMaru: Gekimaden – Maboroshi no Kinmajou (1990)
In this fourth Famicom JaJaMaru game, our brave ninja sets out to save Sakura and Tono-sama. Defeat demons and collect spirits to perform strong jutsu techniques and beat your opponents! Fight your way through the different chapters in a classic Top Down-Action RPG style.

Oira JaJaMaru! Sekai Daibouken (1990)
Now you can accompany JaJaMaru in a bright colored Jump & Run on his mission to save Sakura from the yokai Satan. Battle around the world, through six levels and beat bosses inspired by regional folklore. Battle Dracula in Romania, defeat Nioh in Japan and face Cerberus in Brazil. Relive your JaJaMaru memories – in color! The classic Game Boy game was faithfully colored for an amazing new, yet nostalgic game experience. And for comparison with the original black and white style, you will still be able to play both versions.

Ninja JaJaMaru – Gingadaisakusen (1991)
In the fifth and final Famicom game in the Ninja JaJaMaru universe, JaJaMaru and Sakura are leaving ancient Japan to travel to space. Defeat the evil ruler of the universe, Don Destroyda and finally restore peace. Enjoy some classic side-scrolling Jump & Run and use the powerful cosmo suit to overcome all enemies in your way.

Super Ninja-kid (1994)
Originating from the beloved NES title Ninja-Kid, which was designed and developed by the creator of the Wonder Boy series, Ryuichi Nishizawa, Super Ninja-Kid came as a bright and fresh SNES remake of the original. Improved 16-Bit graphics, 2-player mode and a variety of stages – it offered a lot of new features back then. In this first Super Famicom game, JaJaMaru sets out once again to free a castle that is occupied by monsters. Climb up the mountain, use shuriken, bombs, a boomerang and more to defeat the enemies on your mission to save the castle and its treasures!

Ninja JaJaMaru: The Great Yokai Battle +Hell (2022)
The latest addition to the iconic series is a real throwback to the good old times. Accompany JaJaMaru to safe princess Sakura from the evil pirate Namazu Dayuu – just like back in the 80s! This time, get together with a friend in a local 2-player mode to battle the huge yokai army. But that’s not all – there are a lot of awesome features included in this brand-new Ninja JaJaMaru title. Collect more than 20 playable characters, including the JaJaMaru family and also allied yokais that support JaJaMaru in the battle against the evil. Every character has its own skills and characteristics. Use your well-known weapons like shuriken and bombs and try out items like minecarts and different kinds of scrolls! Collect coins and discover the unlockable Hell Mode to master some really challenging, new stages. 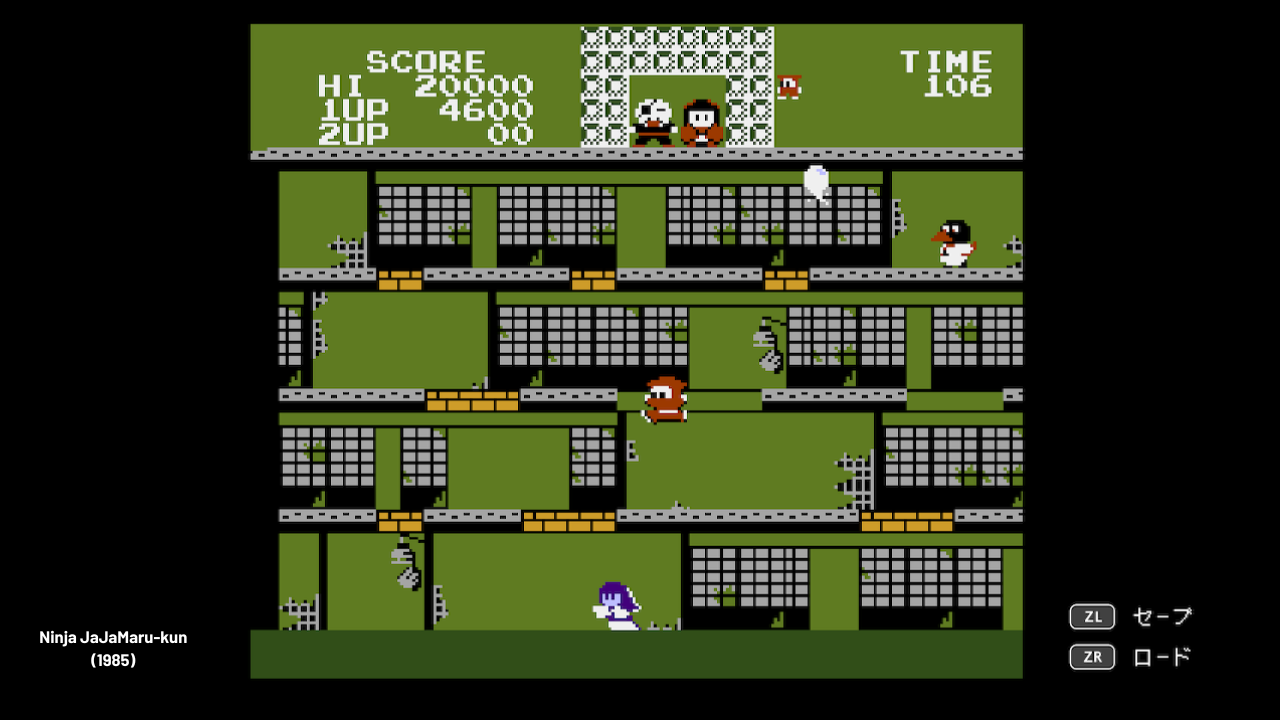 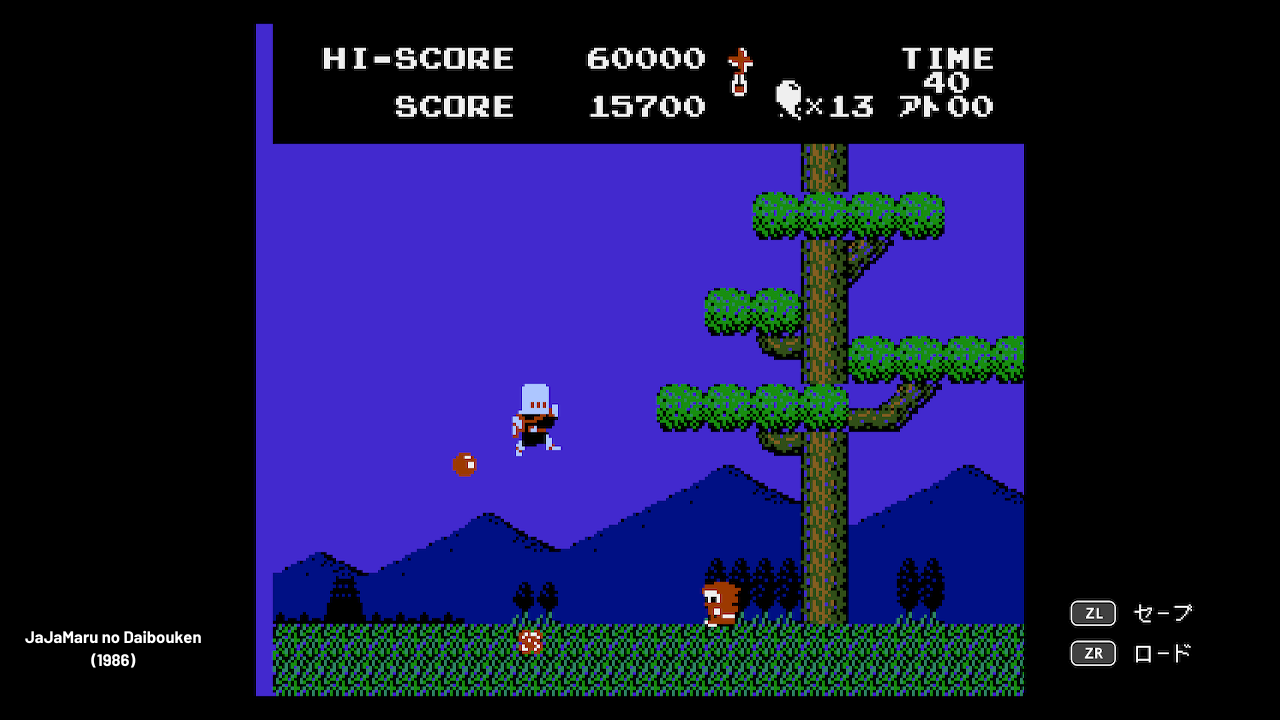 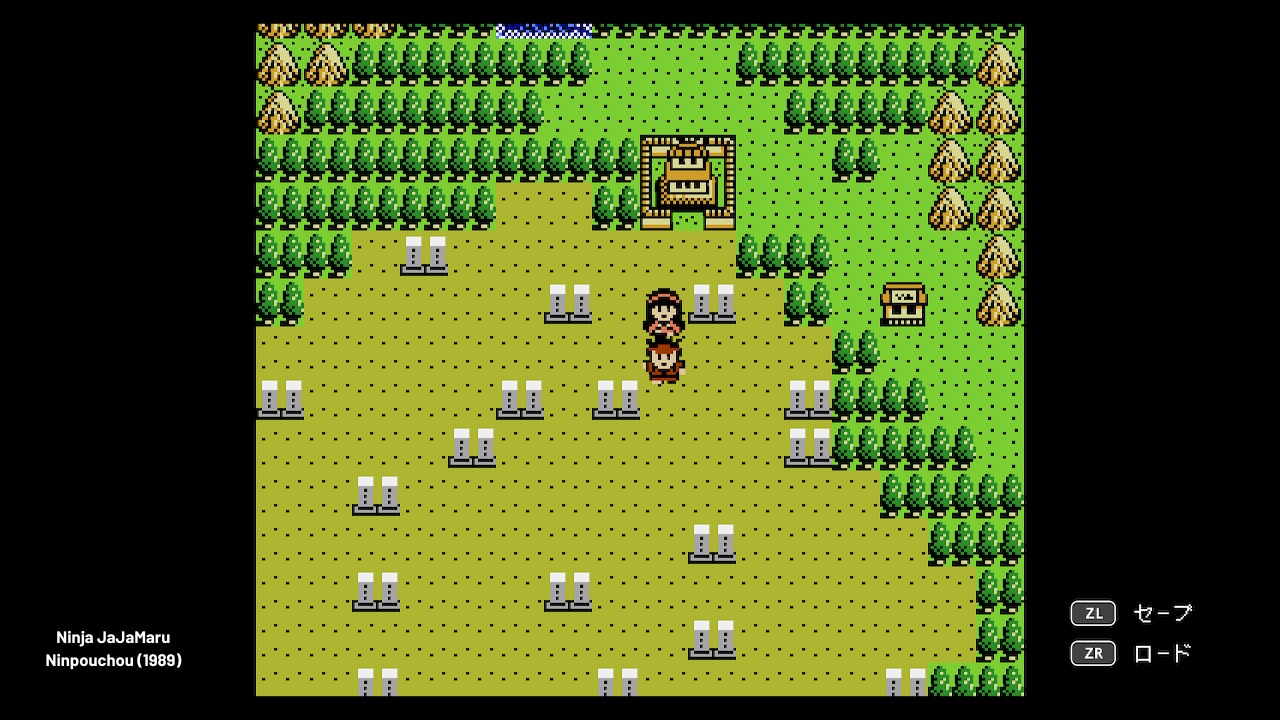 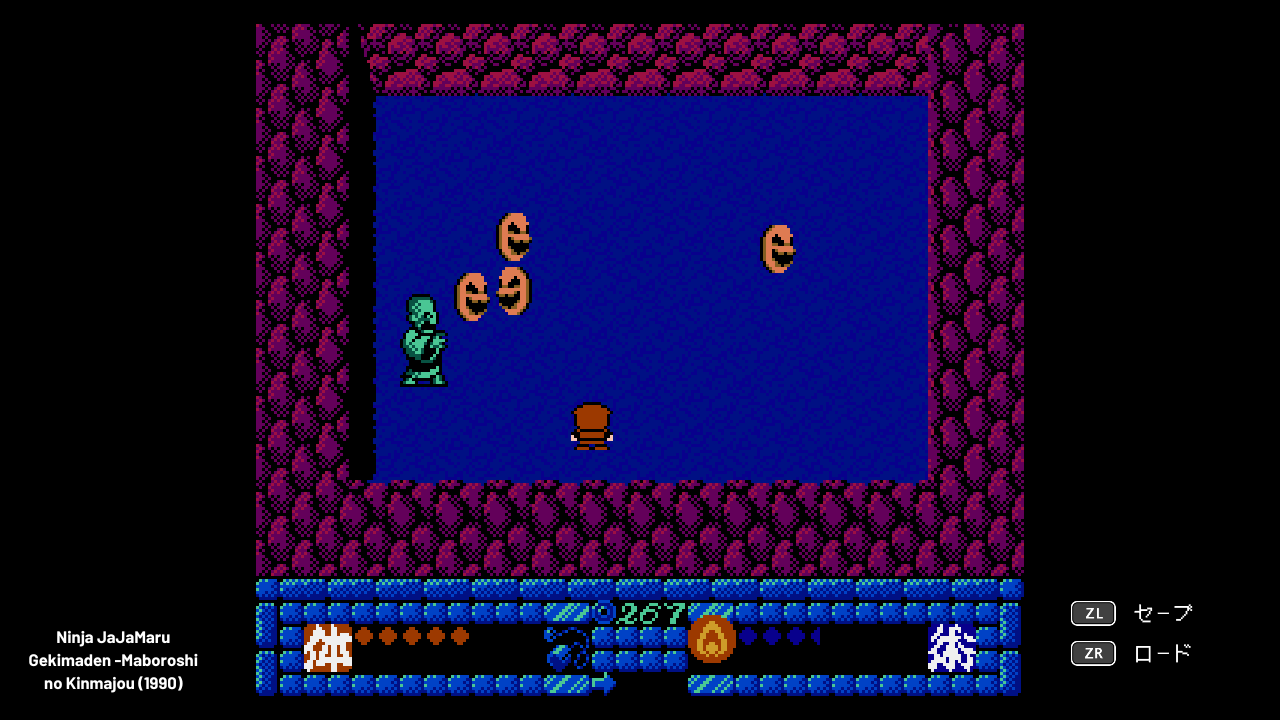 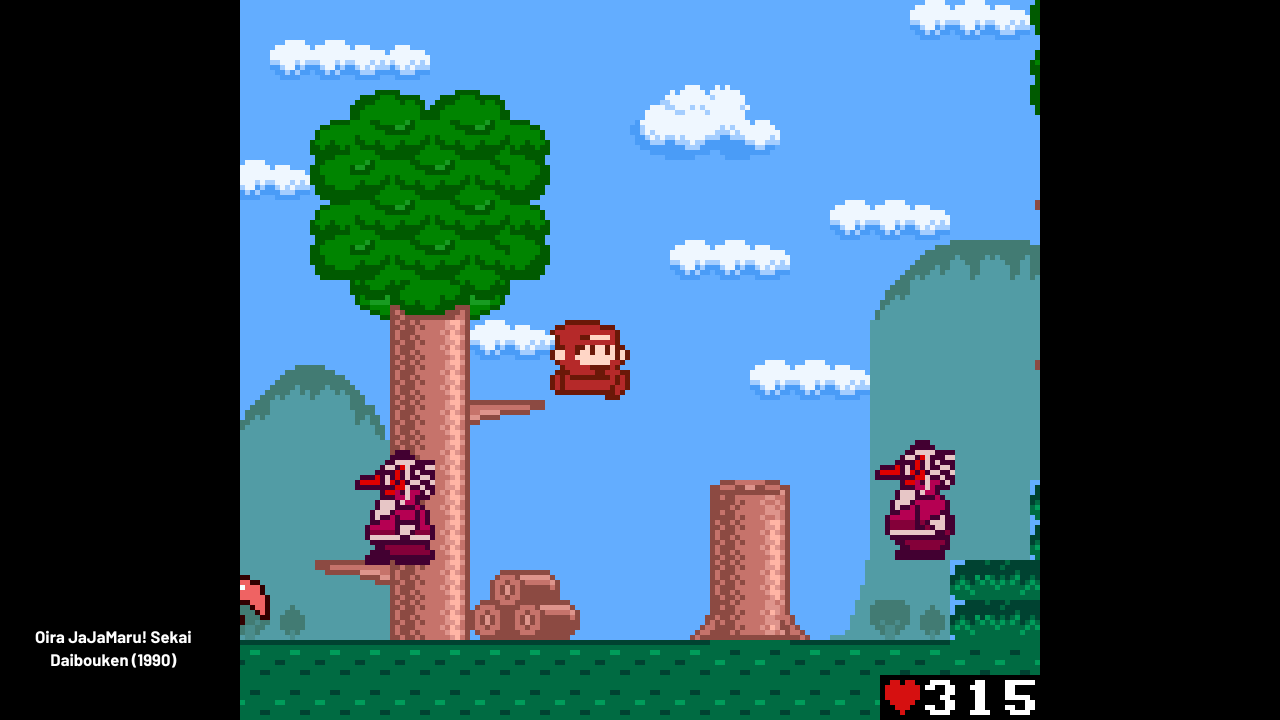 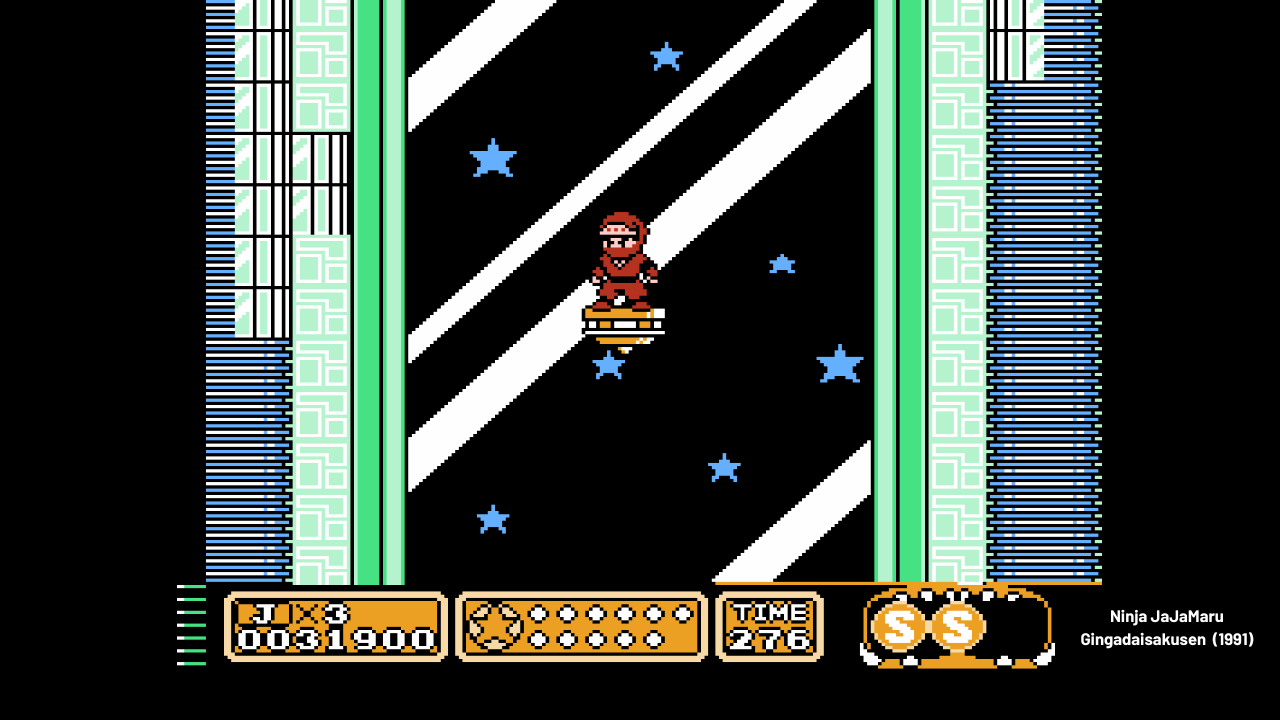 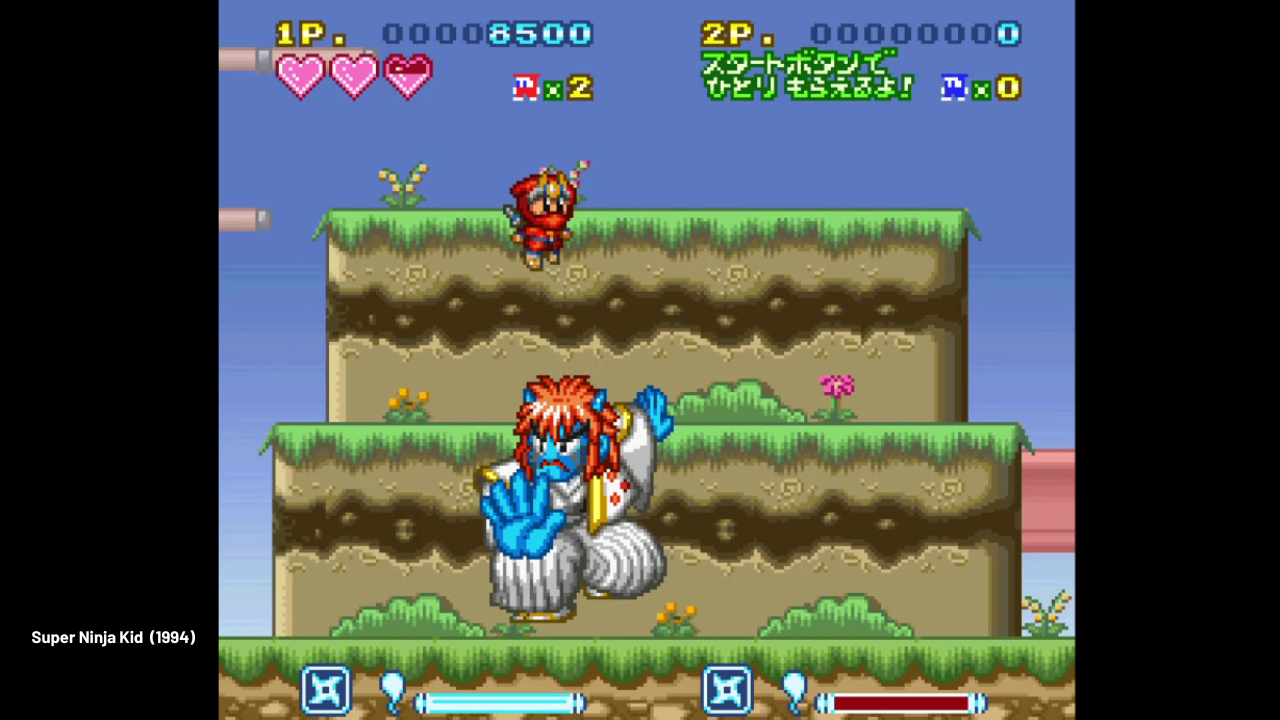 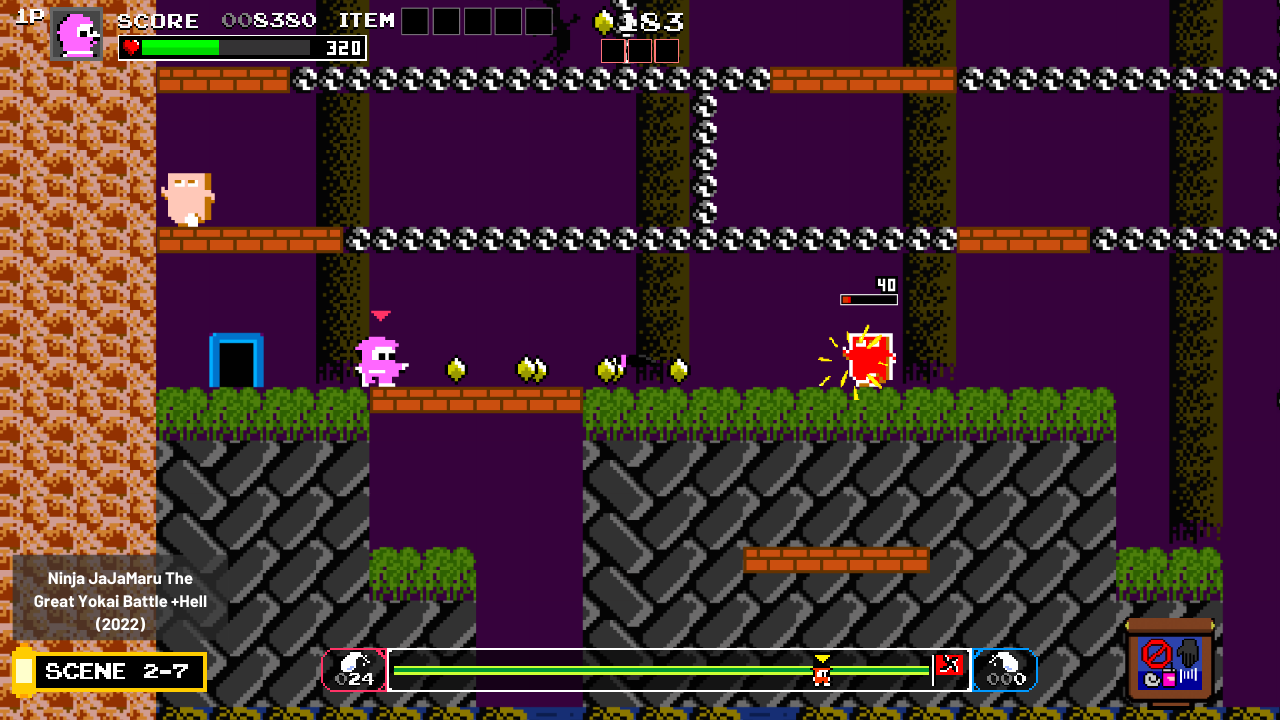 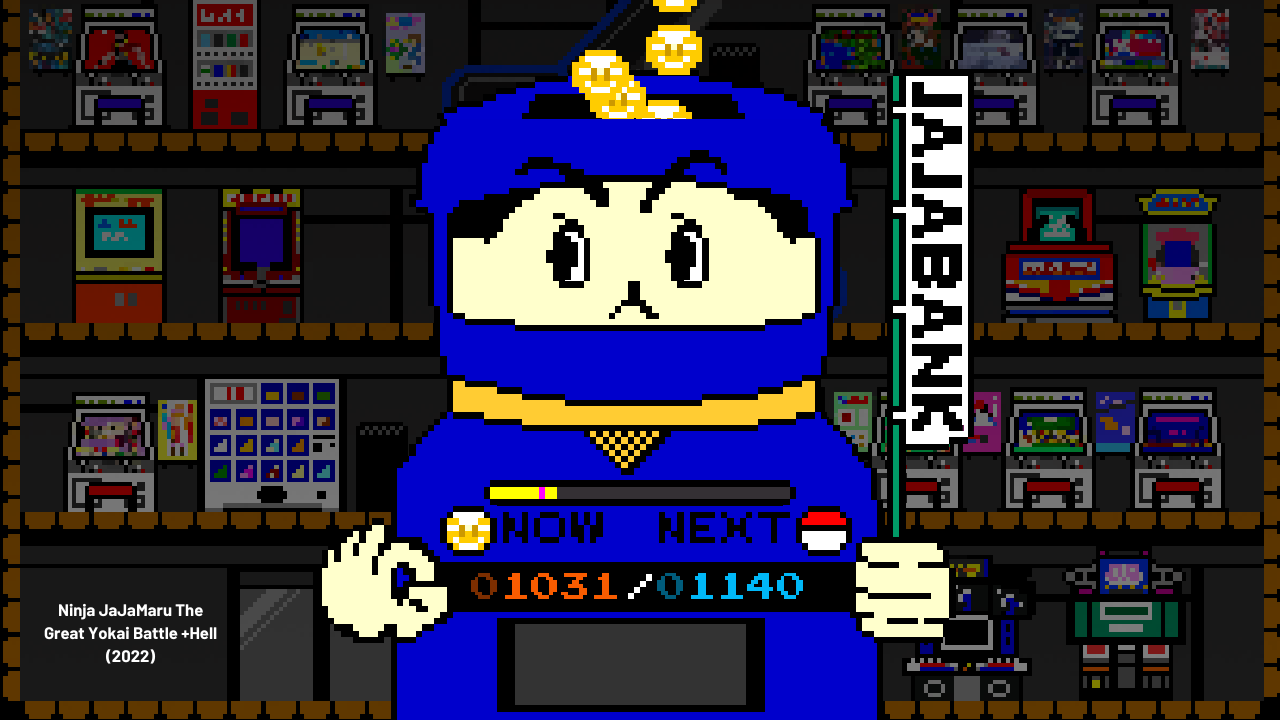